Crista is a second generation PT at Nevada Physical Therapy and a fifth generation native Nevadan. She earned her Bachelor's degree in Biology from the University of Nevada, Reno in 2003 before oing on to earn her Master's degree in Physical Therapy from California State University at ong Beach in 2006. She immediately moved back to Reno to begin her career at Nevada Physical herapy. Crista is proficient in the treatment of spines and extremities. She has grown strong interest in Functional Movement Testing and its relation to injury prevention, hronic injuries and pain. She has taken the Selective Functional Movement Assessment (SFMA) level I and II courses. She is certified in the Functional Movement Screen (FMS), Y-Balance test, and Fascial Movement Taping (FMT) Level I and II. She enjoys the approach of applying her manual therapy skills in conjunction with movement assessment to get a long lasting outcome with her patients. She is interested in the prevention of ACL injuries in female athletes with the application of Functional Movement Screening. Crista also serves as adjunct clinical faculty at the University of Nevada, School of Medicine since 2007.

Born and raised in Reno, Jonathan was a three-year Varsity athlete at Bishop Manogue before he left to complete his Bachelor's degree in Biology with minors in Chemistry and Philosophy at the University of San Diego in 2003. He then went on to receive his clinical doctorate in Physical Therapy with an emphasis in Sports Medicine from A.T. Still University at the Arizona School of Health Sciences in 2007. Jonathan moved home to Reno from Southern California in 2009 and has been at Nevada Physical Therapy since 2013 where he has focused on building an evidence-based model to treat patients ranging from professional athletes to weekend warriors alike. In a world full of quick fixes, gurus and misinformation, he strives to be a voice of reason and logic in Physical Therapy and Sports Medicine. Jonathan is a competitive, national-level powerlifter who brings his love of barbells to all walks of rehabilitation whether your hobby is gardening or scaling cliff faces for fun; there is a plan for you. While he is proud of his Bench Press, Push/Pull and Powerlifting Total State Records, he is most proud of his beautiful wife, Jessica, son, Matteo and pups, Huck and Posey. Jonathan is a ClinicalAthlete.com provider; a network of professionals who understand athletes because they are athletes themselves. 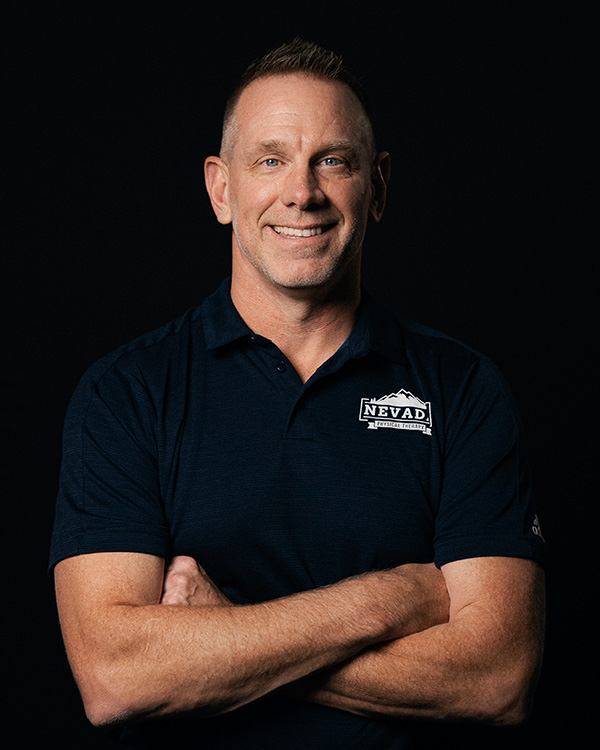 I knew from a young age I wanted to work as a physical therapist. I enjoy the relationships with my patients and the satisfaction of helping them return to doing things they love. I graduated from the University of Nevada in 1997 where I played tight end for the Wolfpack from 1992-1996. Originally I worked at Nevada Physical Therapy in college when it opened in 1992 and later started as a physical therapist in 2002 after graduating from PT school at Bradley University in Peoria, Illinois. The evidence based, personalized approach is what makes our clinic special. I speak fluent Spanish and treat patients across the life spectrum – from adolescent injuries through geriatric total joints. I currently am serving on the State of Nevada Physical Therapy Board. I have served as a clinical adjunct professor for the University of Nevada School of Medicine. My spare time is spent with my wife and 2 daughters skiing, kayaking, hiking – anything outdoors at Lake Tahoe.

Kathleen O'Brien has worked at Nevada Physical Therapy since it's opening in 1993. She is a certified Athletic Trainer but for the last fourteen years she has overseen all aspects of patient financials. As a team member of Nevada Physical Therapy, Kathy's goal is to provide assistance with all of your insurance, billing and collection needs. Kathy loves to ride horses with her husband and son. She also enjoys hiking, playing with her dogs, sipping tea with her girlfriends and reenacting civil war history.

His passion for Physical Therapy began during high school after a sports injury. His rehabilitation experience as a patient and love for sports sparked his interest in sports medicine, primarily the rehabilitation aspect. He left his small hometown off the central coast of California to graduate with his bachelor’s degree in Kinesiology at San Diego State University in 2014. He then received his clinical Doctorate of Physical Therapy, achieving high honors at the University of St. Augustine for Health Sciences in April 2017. In his last semester of graduate school in 2017, he was offered a position at Nevada Physical Therapy; this included an extensive mentorship during his first year of clinical practice. He strives to provide individualized and evidence-based care that helps patients resume the activities and lifestyles they enjoy; there is always a plan for you. Since starting his career in Reno, he has also taken up the sport of powerlifting. He is a local competitor who is working toward a 1000 lb. total. Outside of work, he spends his time with his amazing wife, Sarah, and our two dogs Olive and Roo.

Everyone has something that gets them excited. For me, it has always been helping people make themselves stronger. This mission has acted as a compass in my life, guiding my direction. It helped me realize that first, I had to become strong myself before I started to help others, so I started training and competing in powerlifting and weightlifting. During my tenure as a recreational strength athlete, I accomplished personal bests of a 606 lb squat, 370 lb bench press, a 700 lb deadlift, a 285 lb press, 405 lb clean and jerk and a 310 lb snatch all-around a 240 lb bodyweight.

Later, it led me to earn a Doctorate in Physical Therapy, become a Starting Strength Seminar Staff Coach, and to start my own coaching business, Emerge Stronger Inc. Now it has led me to Nevada Physical Therapy, a diamond in the rough of outpatient physical therapy. A place where evidence is at the forefront of the decision-making process. A place where the person you are treating matters more than their insurance reimbursement—a place I couldn't be happier to start my physical therapy journey.

Born and raised in Reno, Nevada I was fortunate enough to attend UNR on a scholarship to play soccer for the Wolf Pack. During my time at UNR, I received my Bachelor’s degree in Biology in 2015. I then moved to Southern California where I became a phlebotomy technician and personal trainer. While working my passion for science, problem solving, and promoting physical health continued to grow and is what led me to choosing Physical Therapy as a profession. I then attended The George Washington University to receive my Doctorate in Physical Therapy in May of 2021. As a clinician I continue to strive to give each patient personalized and directed care in order for them to achieve all their goals, decrease their pain, and improve their function. In my free time I continue to play soccer, ski, go for runs, play volleyball, and go on hikes with my dog and husband up at Lake Tahoe.